Homelessness is certainly not a new problem in America. Neither are myths, misconceptions, and fictitious beliefs and rumors often perpetuated about people experiencing homelessness and their circumstances.

However, one thing is certain. It’s imperative to sort out fact from fiction when it comes to this community problem present in nearly every American city. So let’s take a look at some of the biggest misconceptions so we can set the record straight.

How Do People Become Homeless?

It’s certainly fiction that all homeless individuals are on drugs and therefore cannot find work, causing them to be homeless. While some may fit into this reasoning, most don’t. Their reason for homelessness isn’t as simple, making it more difficult to explain. But, in reality, the fact is that no one hardship directly leads to homelessness. In most cases, several factors contribute, including:

Unemployment is a major homelessness issue; however, according to the National Coalition for the Homeless, up to 44 percent of homeless individuals are employed. Wage stagnation has been a significant contributing problem over the past decade. While addiction is often a problem for those in poverty, it is typically the result of homelessness instead of the cause.

This is also a myth that hurts many homeless people. Someone who is homeless is no more likely to be a criminal than a person who is housed. However, there is a single legal exception: camping ordinances. As crazy as it sounds, some people who are homeless break that law by simply not having a home. In reality, most homeless individuals spend their resources and time trying to survive and improve their situation.

Do People Choose to be Homeless?

It’s a dangerous myth that people choose to be homeless, allowing us to ignore the trauma of homelessness and the neurobiological effects of human trauma. Being homeless is exhausting, stressful, humiliating, and highly dangerous. Sadly, it’s anything but an easy day-to-day existence for American men, women, and children.

Even though some homeless people may elect to sleep outside rather than in a shelter because they fear having to leave their pets, others in the homeless community, or possessions outside, it doesn’t mean they are choosing to be homeless. They may also be living with severe mental and physical health conditions with extreme symptoms that make it challenging, if not impossible, to have the capacity and ability to make rational life decisions. Some shelters and housing programs also impose strict standards, potentially “screening out” the most vulnerable of homeless people.

More often than not, if we take the time to engage and really listen to someone’s story, we often learn they aren’t “choosing to be homeless.”

Unfortunately, homelessness is traumatic and complex, and there are no one-size-fits-all solutions.

How Bad is the Homelessness Problem in America?

You may have heard that the homeless rate went down for many years, making many people believe we have made great progress in tackling this problem. However, while there are some positive trends to note and even celebrate, the numbers continue to be alarming. For example, the number of people experiencing homelessness in Florida continues to rise.

Over 28,000 people were experiencing homelessness in Florida last year. The data reveals an increase in this number from previous years. While homelessness can wax and wane, it remains a substantial problem in America today that deserves attention.

How Can You Help?

With Project Basic Necessity, we give out hundreds of care packages a month consisting of hygiene products such as deodorant, shampoo, conditioner, toothbrushes, and more. By being present in the community we can build trust and a become friendly face people can rely on and ask for help when they need it. If you want to join us in our mission you can help by donating to Project Basic Necessity or other ways here.

Are California’s Proposed CARE Courts the Answer to Homelessness? 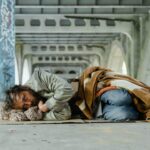 How Has COVID-19 Impacted the Homeless?